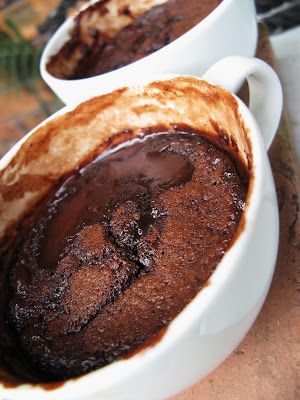 Maxi phoned last night. He spent a good half an hour talking to my son Mitch about their upcoming reunion. Mitch booked his ticket last week and in about one month he shall be winging his way over to Maxi's in Germany for what promises to be an amazing and wonderful experience.

I remember the first time I met him. He walked into the house with the biggest brightest smile, looked me straight in the eyes, came into the kitchen, put out his hand and said "hello, it's so nice to meet you, my name is Maxi". Well, I nearly fell over backwards. Some of my son's friends would barely look at me let alone say hello. Maybe it had something to do with being "16", you know, it's not cool to talk to mums or something like that. Whatever, all I know is this boy was the most polite lad I had met. It didn't stop with the first meeting either. His manners and courtesy were notably better than most of the kids his age but it was also his willingness and eagerness to talk and be engaged in conversation with adults that I found so refreshing.

I was very pleased he had befriended my son. He had been at the school on a foreign exchange program for a year but he and Mitch became really close in the remaining five months of his stay. He came over to our house lots of times, and I always looked forward to seeing him. That was about three years ago, and he has been over to Australia twice since then. Although he and Mitch are "best buddies", I think his aussie girlfriend had a lot to do with it.

On his last trip he had dinner at our place on a regular basis and I recall this one occasion when I made chocolate pudding for dessert and I lost count of the number of times he said "yummy". Honestly, he almost drove me nuts. Did I mention he was a polite boy? But I think this went beyond politeness and he really meant it! He even asked for the recipe. When we gave him his Christmas present I wrote out the recipe and tucked it inside the gift.

So on the other side of the world lives my son's best friend. Time has not dulled their friendship, infact quite the opposite as it has strengthened. I am hearing quite a bit about what is going to be on the agenda. Treks and bushwalks through the mountains in Austria, a stay and hiking in the Black Forest, an ambitious bike ride to Paris that will take two weeks but most exciting of all, attending the football games both home and away of Maxi's team Stuttgart.

I'm afraid my son is not a keen beer drinker so that may present some social challenges in the biggest beer drinking country in the world.
Oh well, I can think of worse challenges. So in place of a beer, I raise this cup of pudding to Maxi and Mitch and I wish you both "a safe, exciting and most adventurous time of your lives". 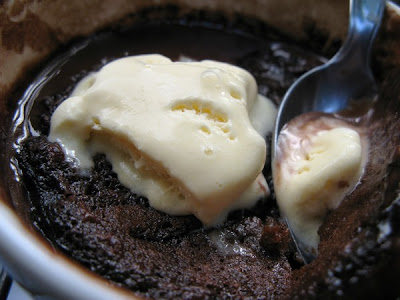 Place all sauce ingredients into a bowl over a pan of simmering water. Stir often till all the chocolate has melted. Keep hot.

In a jug or small bowl place the melted butter, milk and beaten eggs. Whisk till well combined. Pour about half into the well in the flour; mix through; add the remaining liquid; beat till well incorporated and there are no lumps.

Bake for approx 40 to 45 mins or till the cakey part is cooked through.

If left; the cake will absorb much of the liquid so you will not have as much of the sauce leftover. Everyone in my family really looooves that sauce. And so does Maxi. 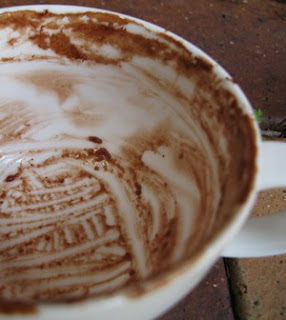 PS: I'm off interstate again. See you in about a week. Take care all and happy cooking.
Posted by Through My Kitchen Window at 4:20 PM