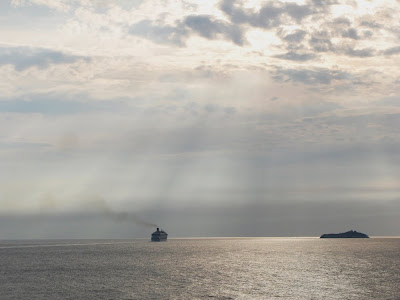 Mitch and I had a fabulous time in Dubrovnik. I should say from the outset, that we had nothing planned. We simply got off the bus in Dubrovnik and left it up to the gods to direct us. Upon arrival we chose Jelena. She crammed our luggage into the back of her "how on earth can this thing move", little, old, beaten-up renault. The soaring temperature of the day reached 38 degrees celcius. We sweated and held on for dear life as she skillfully weaved her trusty vehicle through one way streets, beeping her way up the hills to alert any oncoming drivers. I couldn't believe it. 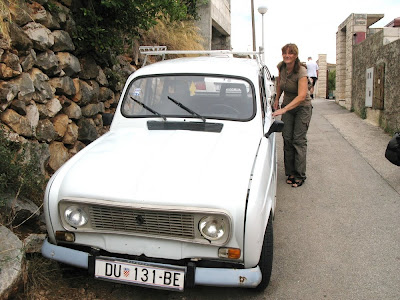 Jelena and her trusty car

When she pulled up beside the road, the car was literally almost touching the side of the wall. I couldn't open the door to get out, so I hopped over Jelena's seat. There was just enough "road" left for another car to pass, although she tells us her mirror is often knocked off and the car has many scrapes from 'careless' drivers. And this was a "main" road in the suburbs!

Perspiring the whole time, we climbed the loose and rocky steps that looked like they were made sometime BC. Struggling with our luggage we finally and breathlessly arrived at her apartment door. I was getting alarmed at this stage I must admit. 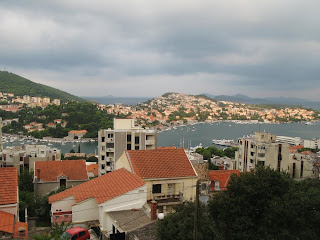 She handed us a key, took us in and opened up the bedroom door to reveal the most spectacular view. We could even lie on our beds and soak up the view. Not that we did. We didn't waste a minute. We grabbed our towels and began walking to the sea via the old town. We just wanted to get wet. I recall the tremendous relief Mitch and I felt when we hit that water for the very first time. Given the unbearably high heat of the day, it was the best feeling ever. It was almost like we earned it. A reward I guess for the "unknowns" of the day that led us to a cosy corner with a crazy car-driving Croatian lady. 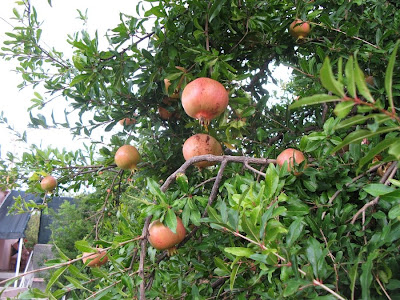 We could pick pomegranates straight off the tree next to our terrace.

Outside of Germany and Montenegro, Mitch and I travelled impulsively and without any itinery. It was nerve racking at times because we weren't sure where we would end up. Looking back now it was terrific because it was adventurous and exciting and sometimes even scary. Somehow everything just worked out. Mitch and I chose to walk almost everywhere. We never took a taxi and I recall we caught the bus twice because it was raining. I was feeling quite fit and fabulous at that time. I am rather annoyed with myself as I observe the growing 'podge' on my belly right now. Oh dear. Please enjoy some photos of our discovering Dubrovnik. 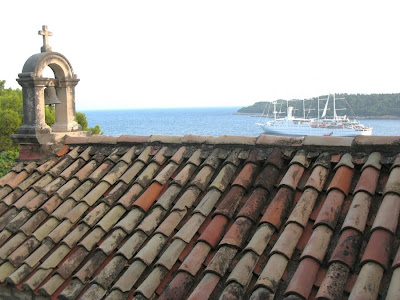 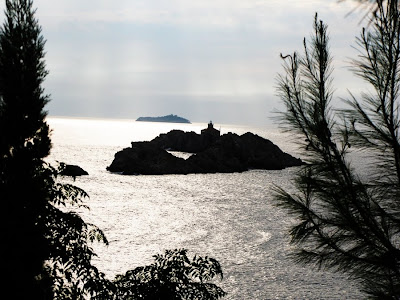 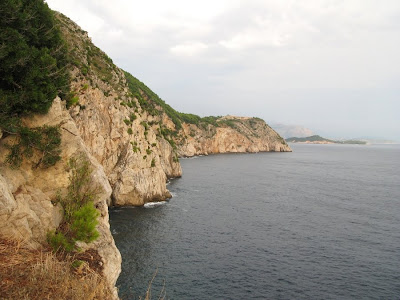 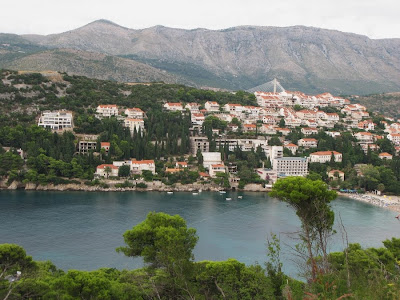 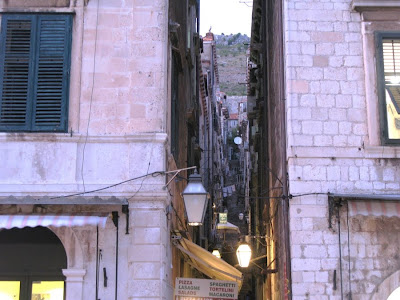 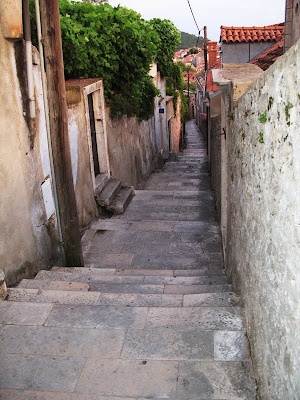 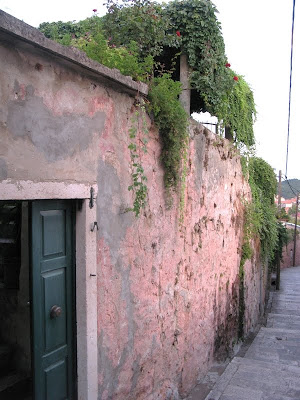 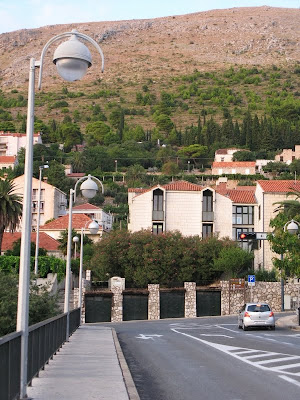 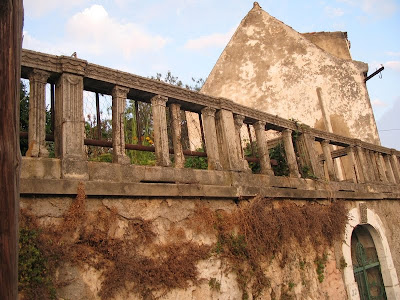 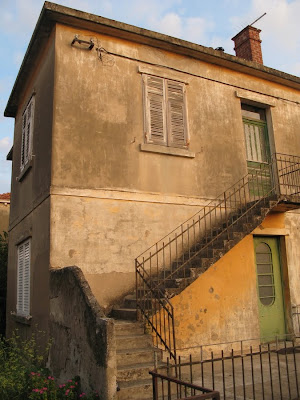 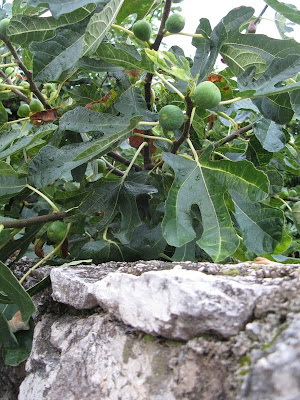 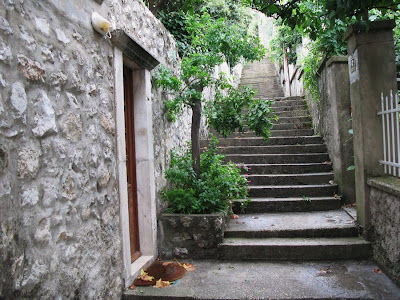 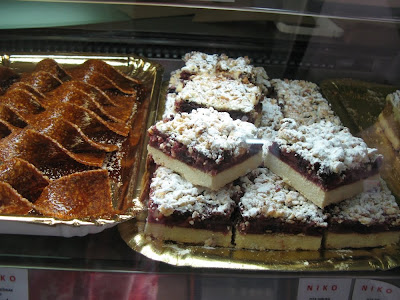 We walked our tooshies off all around Dubrovnik and we explored the old town on three separate occasions. The sea fortress was simply amazing. People actually live there throughout the walled city which surprised us. Families doing what families do. Having their dinner together, tv's humming, phones ringing, computer keys tapping, laughter, arguments, so forth. They didn't have any lawns to mow. Lucky them. Many apartments did have pots with herbs and flowers nestling on or drapping over window sills. 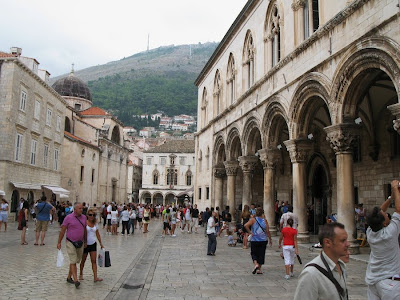 Wherever we walked there were people and shops everywhere. And this bothered me. I said to Mitch I found the crowds and the mostly 'tacky' shops filled with kitch both overwhelming and disappointing. He handled it better than me. He accepted it for what it is and for what it has become today. We tried to get past it as we sat in a cafe having a drink overlooking the marina. At night we sat out along the edge of the water as far away from people as we could get and we tried to imagine Dubrovnik a long time ago. Apart from the "kissing couple" near us, we dangled our legs in the water, looking out to sea and we tried to visualize the enemy coming. I couldn't feel it. I looked at the fortress and all I could feel was people making money from tourists more than happy to part with their money. I felt rather sad. Although I didn't feel the atmosphere I was hoping for, I still admired the tough men of the day that built the fortress, that lived, fought and died by the fortress. 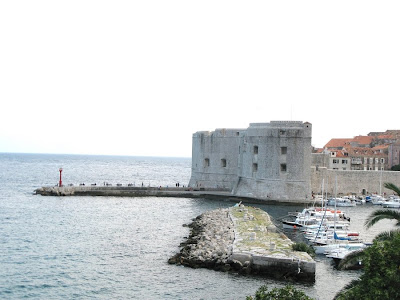 Outside of the fortress, I did admire the locals that lived there. The daily struggles of their lives, trying to make ends meet, taking in tourists to help them get by. Jelena and her mother told me about their lives, day to day and of a long time ago. Her mother recalls the bombing of Dubrovnik less than twenty years ago and the fear she lived through at that time. The hunger and the hardships and families sticking together through thick and thin. Jelena's mother seemed disallusioned with the youth of today. She talked about their lack of respect for the elderly, their selfishness and their lack of compassion and caring. She shed tears as she told me she would prefer to live under the bombs with families that cared and looked out for one another rather than for what life has become today.

She kept patting Mitch on the head and she 'blessed' him for travelling with and for looking after his mother. On the one hand I felt touched she chose to share her views of her life with me. On the other I was saddened to hear what those views were. Incidentally I should mention she knew full well I had Montenegrin blood in me, I was going to Montenegro and it was infact the Montenegrins who bombed so much of Dubrovnik. She showed no malice or anger toward me. Infact quite the opposite. She wished me a safe and happy journey and she was overwhelmed to hear that Mitch wanted to see where his grandfather came from.

Before I left with Jelena to go back to the bus station, I asked to see her mother. I slipped "a little" money into the elderly lady's hand and I thanked her for her generous and warm hospitality. She cried and kept "blessing" me all the way out of the door. As I stood there waiting for our bus, I kept thinking of what Jelena's mother had said. Of all the things that I was hoping to 'feel' in Dubrovnik, her words were actually what I 'felt' the most. Tearful and contemplative, I recall Mitch telling me "don't be sad ma" and to look forward to our next leg of the trip. The one that he had most been looking forward to. Finally, his grandfather's homeland was just around the bend. 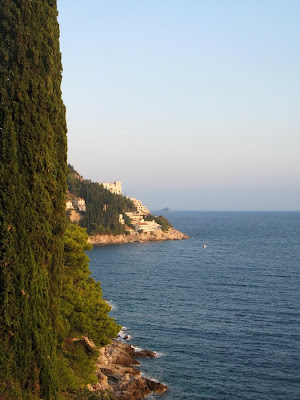 PS: Watch for my next entry. A true Balkan beauty. Stuffed Peppers. It just didn't feel right for me to post it here. I really want to share it with you in Montenegro. See you there!!
Posted by Through My Kitchen Window at 9:13 PM